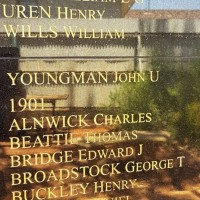 Name Of Mine On Which Last Employed
Lady Robinson GM, Coolgardie, Western Australia

Diagnosis or cause of accident
Struck by falling timber.

Other Information
His brother, Harry Alnwick, was working with him at the time of the accident.

Now incorporated as part of the Burbanks open pit, some 8 kilometres south of Coolgardie along the Londonderry Road. The deposit was discovered by Robert (Bob) Robinson, the mine named after his wife. Reports of development work and crushings were found from 1898. Robinson was the original and only shareholder, and had been a prospector in the area for many years. As time went on Robinson's involvement decreased, and other shareholder's became involved. The mine produced dividends for this small group. Robert Robertson died on June 6 1906, aged 65, from lung and liver complications, and by this stage his involvement with the mine was practically nil. Mining continued after his death, largely through tributers, until the last information found in 1913. Burbanks is an abandoned town in Western Australia located between Coolgardie and Londonderry in the Goldfields-Esperance region of Western Australia. In 1894 gold was discovered in the area and the townsite was gazetted in 1897.Wikipedia