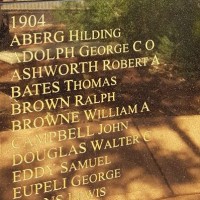 Spouse's NameEllen Goodfellow was born on 29 September 1865 in Riverton, South Australia, the daughter of Edward. She married Charles Otto George James ADOLPH on 5 June 1888 in Marrabel, South Australia. She died on 1 March 1955 in South Australia at the age of 89.

Diagnosis or cause of accident
Fell down mine shaft after missing his footing.

With sickening regularity the fatal accidents in connection with the mining industry continue. Since our last issue three valuable lives have been lost—Charles Adolph fell down a shaft at Kanowna and was picked up dead, Samuel Eddy was blown to pieces at the South Kalgurli, and L. Evans was mangled by the machinery at the Horseshoe and died in the hospital. Truly a curse hangs over the yellow metal. Would that we were able to do without it.
- Westralian Worker Fri 25 Nov 1904

Other Information
FUNERAL NOTICES.
LOYAL ORANGE INSTITUTION. - Earl of Hopetoun Lodge, No.3
All members of the above are requested to meet at the Lodge Room for the purpose of attending the funeral of the late Bro. Charles Adolph, which leaves the White Feather Hospital at half-past 3. By order W.M.

The members of the Kanowna Miners' Union (A.W.A.) are respectfully invited to attend the funeral of their late comrade CHARLES ADOLPH to move from the White Feather Hospital at 3.30 o'clock This (Wednesday) Afternoon, for interment in the local cemetery. D. M. Wilson, Secretary.

There was a total of five ADOLPH family members at Kanowna, namely Charles and brother Frederick with wife Elizabeth (father of Minnie who is also buried at Kanowna brother of Hugo with wife Ellen?