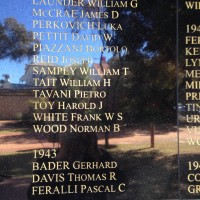 Name Of Mine On Which Last Employed
Wiluna GM, Wiluna, Western Australia

Diagnosis or cause of accident
BADER was found lying unconscious on the cracker platform, apparently having fallen from another platform about 10ft. above. There is no evidence as to what caused him to fall, but he was found to have a fractured skull and he died without recovering consciousness

Other Information
BADER.-On May 30, as the result of an accident, Gerhard (Bob); aged 38 years. Inserted. by H P. V. Hodge. Auf Wiedersehen

The Moonlight Gold Mine was a major mine near Wiluna in the late 1930's. It was located just south-east of town, with underground mining from a main shaft. Several open pits now occupy the area, as part of the northern section of the Wiluna Gold Mine.
Mining began around 1904, with a 10 head mill and cyanide plant erected. Up to 1911, the mine had produced 5181 tonnes of ore for 1078 ounces. From 1912 to 1922, the mine was worked by tributers, and ore carted to the Wiluna state battery. During this period, 28 347 tonnes of ore was crushed for 11 737.61 ounces of gold. Hansel Mundy and Co took out a 12 month option over the leases in 1924.
The gold at Moonlight was found associated with stibnite, which rendered the cyanide process useless. Once the oxide ore was largely mined out, and the sulphide ore was reached, mining ground to a halt. Arsenopyrite is relatively minor, but is the main sulphide at the neighbouring Wiluna mine to the south. Near the surface the stibnite was oxidised to cervantite and stibiconite.
New technology saw renewed interest in the mine in the 1930's. In 1934, the Moonlight Wiluna Gold Mines Ltd was floated in London. The company was owned by the Goldfields Australian Development Limited. Well known local mining engineer, R.J. Agnew, was appointed mine manager.
In 1935, the company was sinking a main shaft, building offices and five staff houses, and employed 112 men. Mining began on April 15 1936. The ore was sent through primary crushers on site, then railed a short distance for further processing. Here the ore was ground finely, and subjected to oil flotation to produce a concentrate. It was then sent through a smelter, jointly financed by the Wiluna Gold Mine, to extract the gold. They were mining 8500 tonnes of ore per month.
The company was unusually blunt about its prospects (not a trait seen among many mining and exploration companies to this day. In 1940, after exhaustive exploration, they found gold bearing structures faded out at depth. A further warning was made in 1942, that ore reserves would not last the year. The mine limped along with reduced production until 1945, when it closed altogether. The company itself lasted a few more years with other exploration interests in Western Australia.