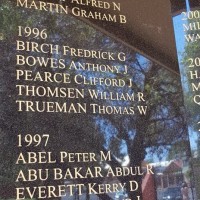 Name Of Mine On Which Last Employed
Victor Decline, Kambalda, Western Australia

Diagnosis or cause of accident
A crew had lit-up a fuse to initiate the blasting of a stripping round near a decline face and, using a vehicle, retreated up the decline past the point of where another party was looking for them, without either party noticing the other. The second party, which included deceased, then traveled down the decline to the face, still in search of the face crew and unaware that the blast had been initiated. As Mr Abel got out of the car, the blast detonated and was he struck by a flying rock.

Other Information
On a plaque:
KAMBALDA MEMORIAL GARDENS
These walls are a memorial to all the men from this community who have been accidentally killed in the mining industry. They are also a memorial to the hundreds of men who died from illnesses as a result of that same industry. They are part of the history of gold mining from the very beginning and their contribution deserves to be recognised.