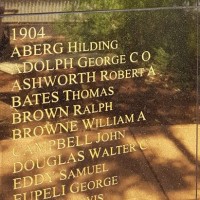 Name Of Mine On Which Last Employed
Bardoc GM, Western Australia

Diagnosis or cause of accident
Inhalation of dynamite fumes.