Heroism at the Golden West Mine: 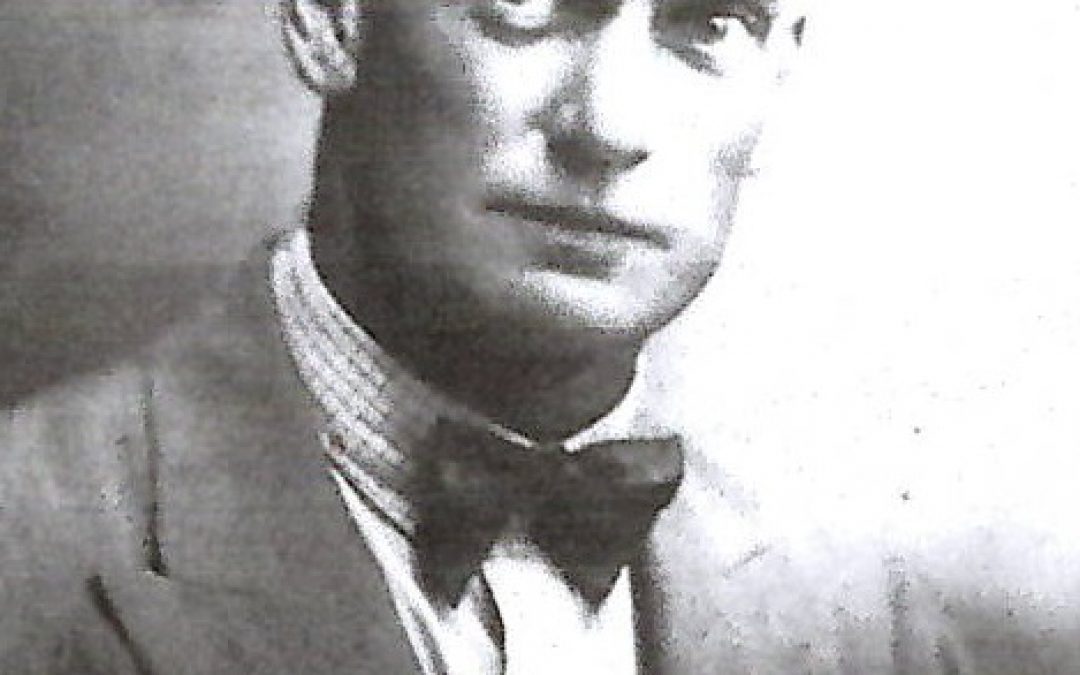 In 2013, a lady called Margaret Sanders, contacted me about including her uncle Ralph Douglas Young (Joe), on the Western Australian Virtual Miners Memorial. She has seen our appeal for family members to come forward to provide additional information about miners names to be engraved on the memorial at the WA Museum Kalgoorlie-Boulder and also on the  web site WAVMM. Although we had his name and basic details from official sources, Margaret was able to add so much more to the profile page for the uncle she never knew. She was only 2yrs old at the time of the family tragedy so of course she cant remember it, but she was told what happened by her father in later years. 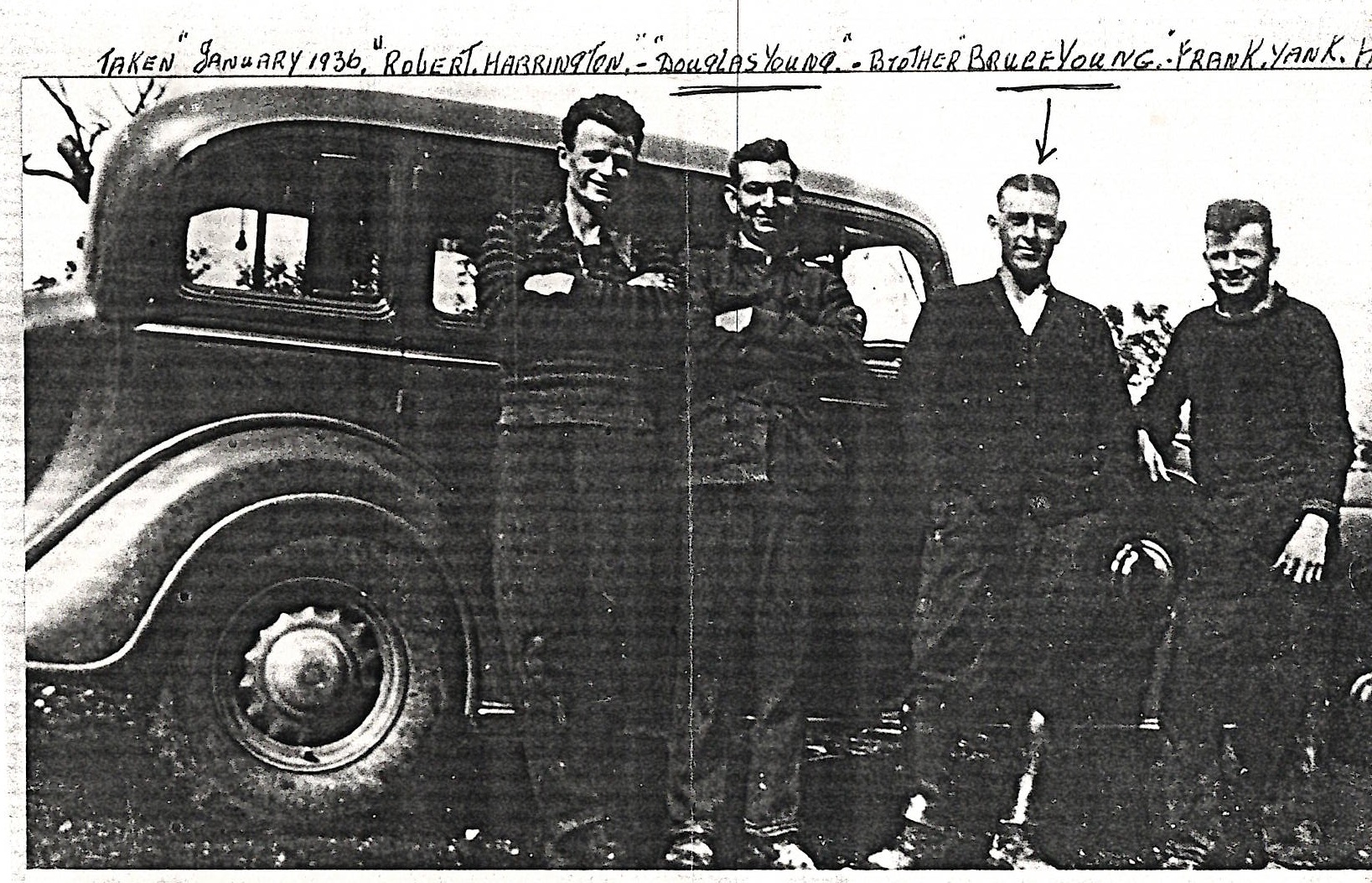 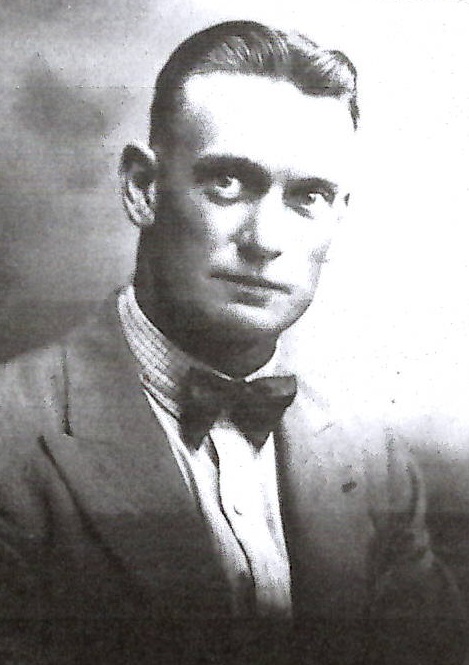 HEROISM OF OTHER MINERS
GALLANT WORK IN FOUL SHAFT.
TWO’ VICTIM’S PERISHED IN
ATTEMPT TO RESCUE THE FIRST.

Details of the tragedy that occurred on Tuesday, at the Golden West mine at Kunanalling, 25 miles north of Coolgardie, when. the manager and two employees of the mine lost their lives in a shaft 135ft deep and containing
25 ft of water, reveal that apparently two of the victims died in an attempt to rescue the first man to descend the shaft.

Another feature of the tragedy was the heroism displayed by other employees of the mine, who, notwithstanding the extreme danger of venturing into the foul air, descended the shaft, in an effort to save the victims. The victims were

It is not known definitely whether the men were killed by the gas or were drowned. The tragedy occurred at about noon. During the morning the three men had been engaged in bailing water from the shaft, for use in the mine battery.  They were using a 40 gallon drum, which was attached to a rope and hauled over a whip by a motor truck. Young was driving the truck. The shaft, which contains no workings, had not been used for many years. It is timbered and can be descended by means of a ladderway.  It was stated yesterday that for three days prior to the fatality the men had been working in the shaft, putting down a ladderway to the bottom, and that one of these men became sick and could not work on Tuesday. It is now thought that he was suffering from the effects of gas. It is assumed that during the baling operations trouble was experienced in the shaft and that either Lethridge or Henderson descended the shaft by the ladder to investigate. It is thought that the first man to descend was overcome by the foul air and fell into the water and that one of the two other men, in going to his assistance, met a similar fate. 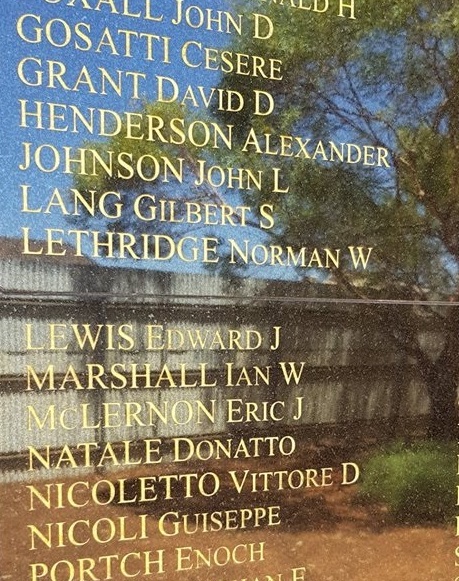 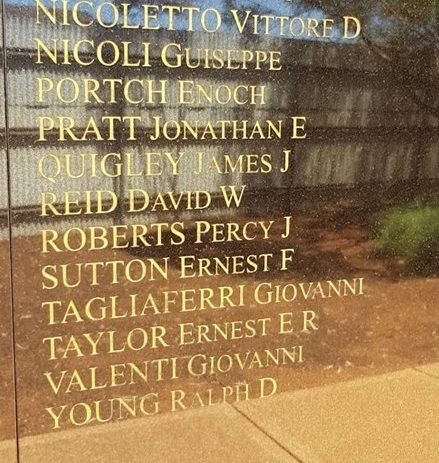 Young was the last man to descend the shaft and he too, was apparently overcome by the gas and fell into the water. When the men failed to return for lunch at noon, the suspicions of other employees on the mine were aroused and two men, Ernest Rathjene and Robert Harrington went to the shaft at about 12.20 o’clock. Harrington descended, the shaft by the ladderway to within 15 ft of the water level, but was unable to see anything and returned to the surface. Rathjene then went down the shaft to the water level and after a few moments he saw a boot showing above the water. He pulled at the boot and drew Young’s body from the water.  Young appeared to be still alive, but was frothing at the mouth. Rathjene called out to William Norris and Robert Harrington who were at the top of the shaft. 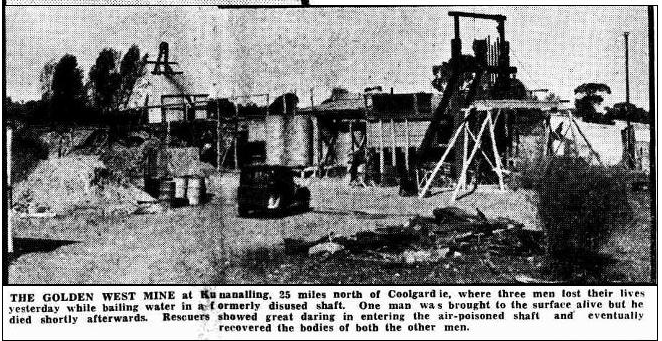 “The three of them are here” he shouted out, but at this stage he had not yet located the other two men. Frank Harrington climbed down the ladder and assisted Rathjene, and notwithstanding the foul condition in the shaft, held Young’s head above the water. Frank Harrington returned to the surface, Robert Harrington then climbed down the shaft and assisted Rathjene to tie the body in the bucket. The bucket, with Harrington riding on the top, was hauled to the surface. In the meantime the accident signal had been given underground and all the employees of the mine, who number about 18, had gathered at the shaft. After an unsuccessful effort to locate the other men, Rathjene, who had been down the shaft for three quarters of an hour, commenced to crawl up the ladderway. During his ascent he was sprayed with foul water from the bucket and it was only with the greatest difficulty that he reached the surface.

He felt himself failing, but was unable to call out and just managed to reach the top of the shaft. William Norris then descended the shaft in the bucket with an improvised grappling hook attached to a rope, but was unable to locate the bodies of the other men. At this stage, at about 2pm, Constable Sunter and Dr. S. Matthews, of Coolgardie arrived, at the scene, and found that for an hour the mine employees had been trying unsuccessfully to revive Young by means of artificial respiration. Dr. Matthews pronounced life extinct. Standing at the  shaft head Constable Sunter succeeded in locating the body of Lethridge by means of a grappling hook, and Norris, who in the meantime had returned to the surface, was strapped in the bucket and lowered to the water level. He placed a rope around the body, which was hauled to the surface. On reaching the surface Norris was violently ill, having been affected by the air in the shaft. Following fruitless efforts to locate Henderson, and in view of the conditions in the shaft, Constable Sunter decided at about 5 p.m. to go to Kalgoorlie for assistance. Messrs. C. E. Thomas and R. O. Trewhella, who are both first aid men on the Lake View and Star mine, volunteered to return to the shaft and assist in the search. They brought with them a respiratory outfit which generates its own air and weighs 38 lb. The party left Coolgardie at 9.15 p.m. and arrived at the mine shortly before 11 p.m.

A light was lowered down the shaft in a bucket to test the air and the light burnt well. Wearing the respiratory outfit Mr. Trewhella was lowered to water level in the bosun’s chair. He carried a plank with the intention of placing, it across the bottom of the shaft in order to facilitate his efforts, but the plank was three inches short and he was forced to work from the chair, which was swaying at the end of the rope. He hooked the body twice but it slipped, and only on the third attempt succeeded in bringing it to the water level. The body was hauled to the surface by a rope. The work occupied three quarters of an hour and Trewhella did not return to the surface until midnight. He stated that the air was very foul and that he could taste it through the mask. The three bodies were subsequently taken by motor truck to the morgue at the Coolgardie Hospital by Constable Sunter. 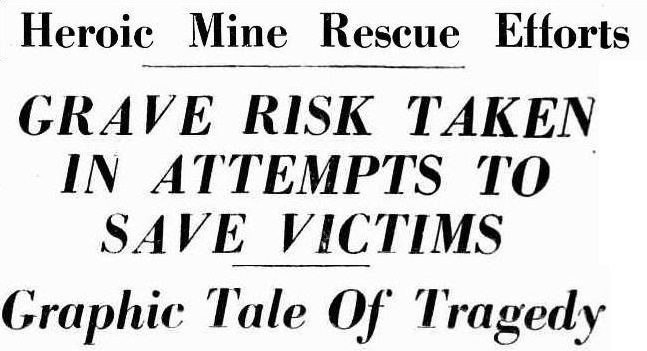 Mr. Young took over the management of the mine in November last, after having worked on the property for several years. He was married last October and has left a young wife. Men on the mine spoke highly today of the esteem in which he was held. Mr. Lethridge’s relatives reside at Kalgoorlie. It is understood that Mr. Henderson originally came from Scotland. Messrs. Young and Lethridge will be buried at the. Kalgoorlie Cemetery today (27th Feb), and Mr. Henderson today at the Coolgardie Cemetery. No work was done at the mine yesterday. At the Coolgardie Courthouse yesterday an inquest into the deaths of the three men was opened before the acting coroner, Mr. P. A. Moran, J.P., and a jury of three. After evidence of identification had been given by Mr. Rathjene. the inquiry was adjourned sine die, but it will probably be resumed on Monday next. Yesterday afternoon the jury, accompanied by Inspectors A. W. Winzar and E. E. Brisbane, of the Mines Department, and Constable Sunter, visited the mine. Samples of the water were taken from the bottom of the shaft and will be forwarded to the School of Mines, Kalgoorlie, for analysis.
A bucket full of water was drawn to the surface and gave off a nauseating smell. It was stated that the water when disturbed gave off sulphuretted hydrogen which, when the victims descended the shaft, had probably overcome them. A silver coin placed in the water quickly turned black, which is stated to be an infallible test of the existence of sulphuretted hydrogen.
The triple fatality on the Golden West Mines brings the number of fatal accidents in the mining industry to seven since January 1. Last year, to December 31, 26 men lost their lives while working in the industry and the total for 1934 was 19 fatal accidents. 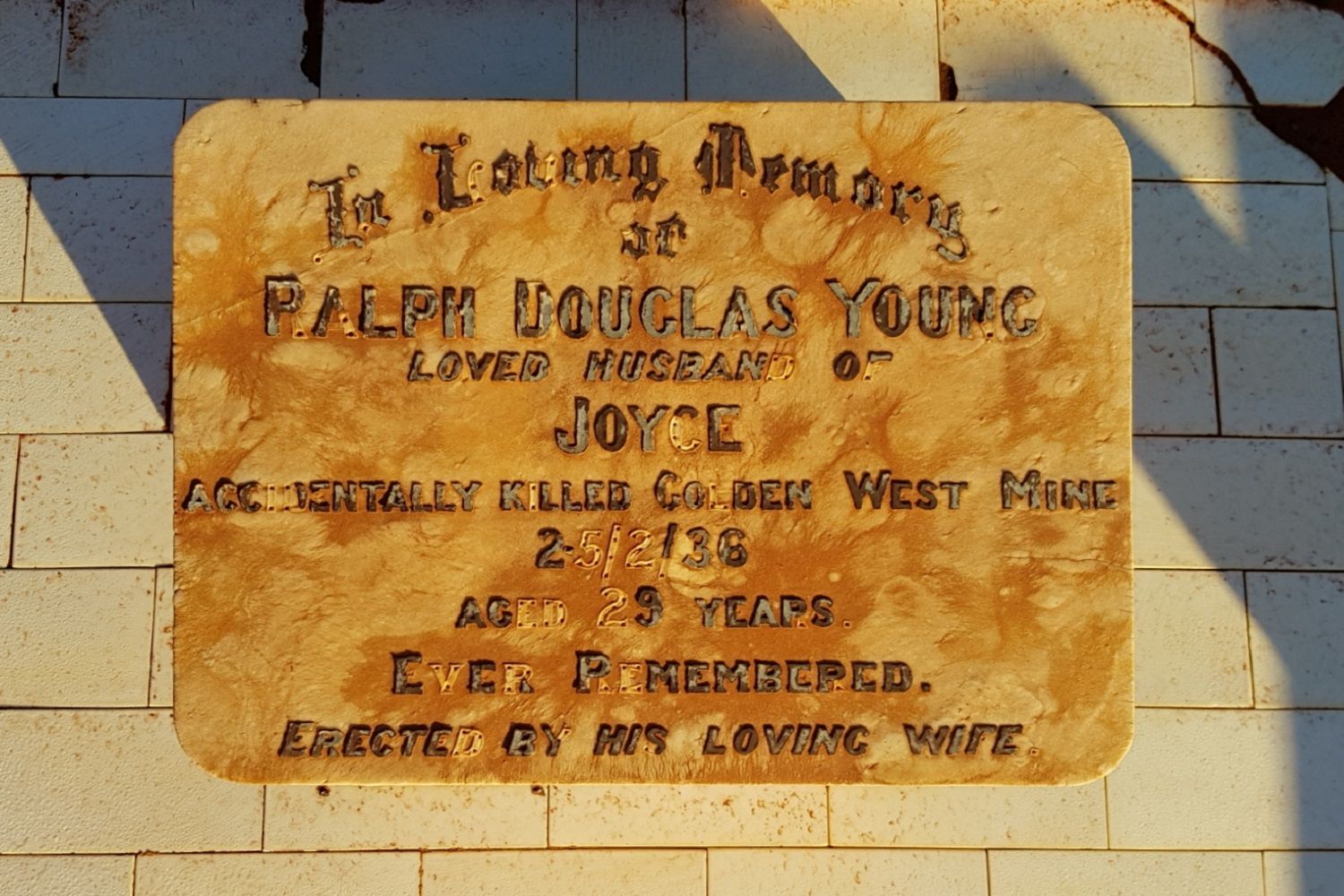 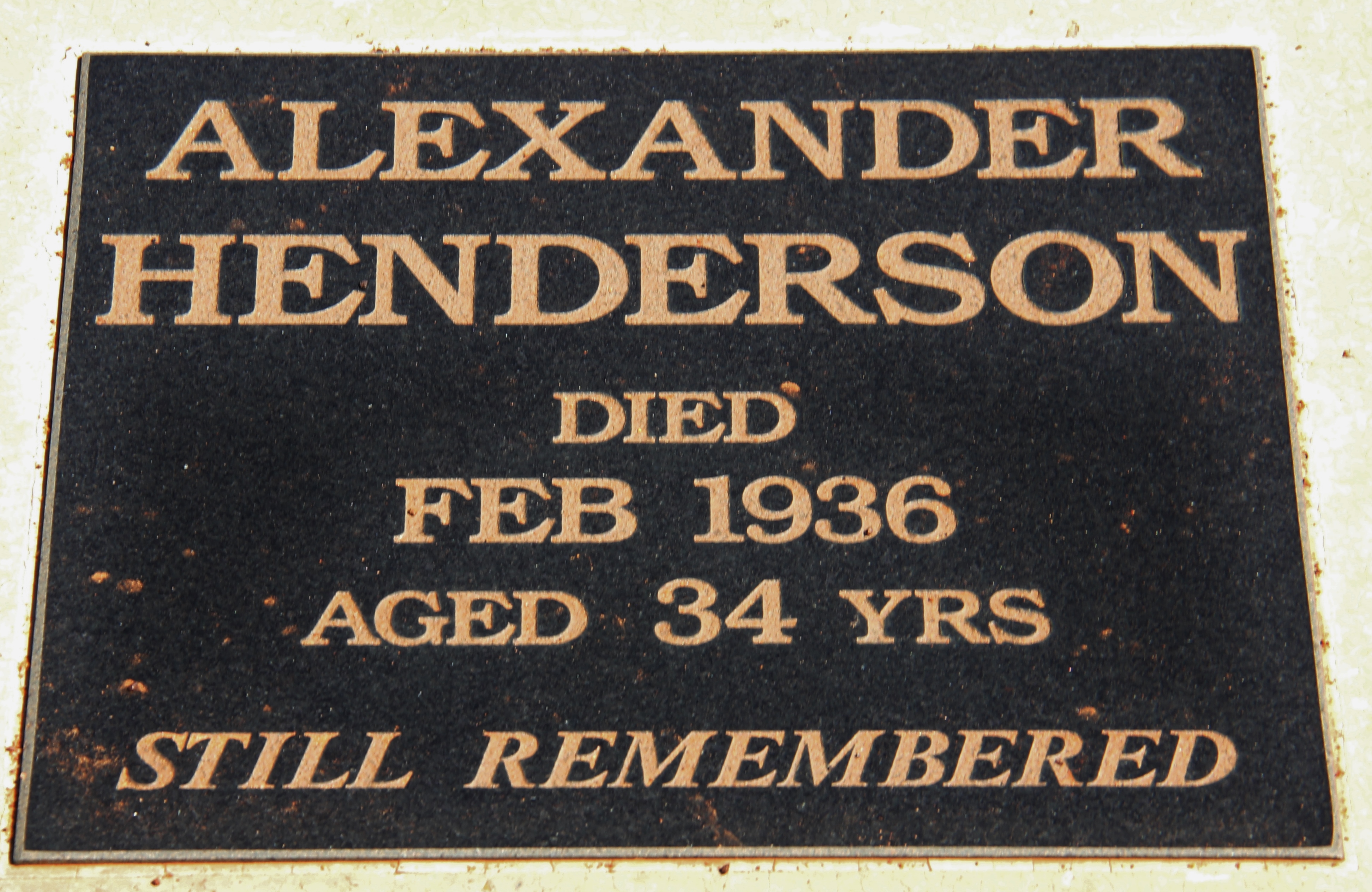 Among awards for bravery n Western Australia by the Royal Humane Society are .the mceavc ollowing— V , Silver Medal.—George Sawer, Ernest Albert Cooper arid Norman James Allen. Bronze Medal.—William Allan Ernest Rathjean, Frank Harrington and Robert Harrington. Sawyer, Cooper and Allen all collapsed after rescuing A. N. Gilbert, who was gassed while ascending a ladder in a mine shaft near Widgiemooltha on May 23, 1935. They were unable to save the life of Raymond Brown, who was also gassed. Rathjean, Norris, and the Harrington’s made valiant efforts to save Ralph Douglas Young, Norman Waldo Lethridge and Alexander Henderson, who were drowned after having been overcome by foul air in the Golden West mine at Kunanalling.